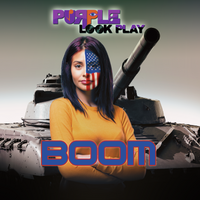 From the recordings Boom and Boom

Boom has sounds influenced from Motown and the economic and industrial boom of the 1950s. It is a song about a very competitive America that works through issues, continues to accomplish great feats and wants to be atop the mountain.

Overview: song is about the boom in the 50s in America and the importance of balancing out success; the lyric also relates to America’s positives current day. Overall, America is at the top, but she still and always will have her challenges.

Build
(Those growing pains); they can hurt